POSTPONED: Grand Opening of Detroit River
International Wildlife Refuge Gateway and Visitor Center
GROSSE ILE, MI – Congresswoman Debbie Dingell (D-MI), the U.S. Department of the Interior and the U.S. Fish and Wildlife Service, in coordination with Wayne County, announced the postponement of the grand opening of the Detroit River International Wildlife Refuge Gateway and visitor center, originally scheduled for May 9, 2020.
The postponement keeps with guidance from the CDC. The event will be rescheduled when it is prudent to do so.
“It’s a difficult decision but the right one to postpone the grand opening celebration of the Refuge Gateway and John D. Dingell, Jr Visitor Center,” said Dingell. “We want this event to be a celebration and time for the community to come together. That’s just not appropriate at this time. Delaying the grand opening will allow us all to gather safely when the time is right.”
For updates on the event, check the Detroit River International Wildlife Refuge's website: https://www.fws.gov/refuge/detroit_river/
Community Grand Opening:
DRIWR and Refuge Gateway

Join us for our May 9th [Date to be announced. Stay tuned!] grand opening to explore nature trails, our fishing dock, and participate in outdoor activities! You can try your hand at instructional archery or fishing, and even participate in a kayaking demo. Guided tours will be available to learn about our history and some fun facts about Michigan’s wildlife! If you want to get your feet off land, the 100-foot luxury boat the MV Portofino will also be on site for tours. Shuttles will be available to take visitors to and from the free off-site parking.

Free Off-site Parking: Parking map to come soon! We’ve partnered with the community to provide free off-site parking. Shuttles will be used to take visitors to and from the refuge. (Check back soon for off-site parking lot locations.)

Food: Visitors are welcome to bring a picnic lunch or try one of the three food trucks on-site! Picnic tables will be available. 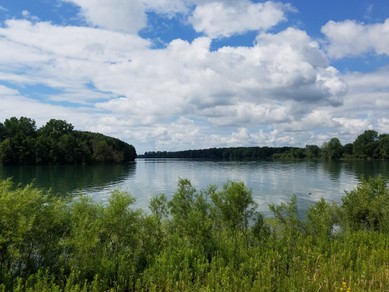 Fishing: Kick off the fishing season by exploring our fishing pier – deep enough to catch walleye! Several guides will be on site with equipment, tips and tricks for that elusive big catch.  *Ages 16+ will need a state required fishing license*

Archery: Bows, arrows, and targets provided! An instructor will show you how to shoot your shot. Archery can be moved inside in case of weather constraints.
Simulated Kayaking: An instructor will demonstrate kayaking at our kayak launching site! They will explain the differences between boats, provide a summer schedule for local guided tours, and provide info on local rental options.

Trails: Take a walk through Humbug Marsh on a guided tour or independently, on 2.5+ miles of both accessible and rustic hiking trails! Stop at the viewing deck to watch the eagles and other birds fly across the water or resting in their nests.
River Tours aboard the yacht MV Portofino: Four half-hour guided tours will depart from the new fishing pier in the afternoon! Tours will leave the dock at 12:30 pm, 1:30 pm, 2:30 pm and 3:30 pm [To be announced]. Tickets will be available at the tent near the dock entrance.

Ribbon-Cutting Ceremony:  Happens at noon [To be announced] in front of the John D. Dingell Jr. Visitor Center.
Tickets for all tours are first come, first serve.
Stay tuned for more details in the coming weeks!
Dingell, U.S. Department of the Interior, &
U.S. Fish and Wildlife Service Announce
May 2020 Date for Grand Opening of
Detroit River International Wildlife Refuge Gateway and Visitor Center
GROSSE ILE, MI – On October 7, 2019, Congresswoman Debbie Dingell (D-MI), the U.S. Department of the Interior and the U.S. Fish and Wildlife Service, announced that on May 9, 2020 [To be announced], there will be an event to mark the Grand Opening of the Detroit River International Wildlife Refuge Gateway and visitor center.
The Detroit River International Wildlife Refuge is the first and only international refuge in North America and stretches along the shoreline of the Detroit River and western Lake Erie. The refuge focuses on conserving, protecting, and restoring habitats for 30 species of waterfowl, 117 kinds of fish, and over 300 species of birds, while providing quality opportunities for people to connect with nature. It is home to a variety of ecologically important bird species, including bald eagles, ospreys, peregrine falcons; fish species including whitefish, sturgeon, salmon, perch, and walleye.
“This refuge and conservation mattered so much to John. It was his vision for a place to gather, learn and protect the wildlife and natural resources that make our region unique,” said Dingell. “After decades, and the incredibly hard work of many, I look forward to celebrating the Grand Opening of the Detroit River International Wildlife Refuge Gateway and visitor center in May. Being at the refuge truly reinforces one’s appreciation of the outdoors, and I hope everyone can join us for the occasion.”
“President Trump and I are committed to expanding access and use of our public lands, and the grand opening of the Detroit River International Wildlife Refuge Gateway and visitor center will be another excellent way for Michiganders to enjoy the great outdoors,” said Secretary of the Interior David Bernhardt. “This visitor center will provide a place for all to develop a love of the great outdoors through education and exploration.”
“We are proud to announce that we will be opening the new John D Dingell Jr. Visitor Center to the public on May 9, 2020 [To be announced],” said U.S. Fish & Wildlife Service Regional Director Charlie Wooley. “We appreciate our partner’s and the community's patience as we near completion of this beautiful, new facility. This will be a wonderful gathering place and beginning of a new chapter for the Detroit River International Wildlife Refuge in the Downriver community and we hope everyone will come out and help us celebrate" when the new date is announced.
In the early 2000s, then-Representative John Dingell joined then-Canadian Deputy Prime Minister Herb Grey to form a group of local, regional, state, and federal agencies to establish a wildlife refuge along the lower Detroit River ecosystem. Mr. Dingell grew up hunting and enjoying the outdoors in these same areas and made it his mission to establish the refuge. The process formally began in 2001 when President Bush signed legislation written by Dingell to create the Detroit River International Wildlife Refuge. Since that time, the refuge has grown from a couple of small tracts of land into a 6,200-acre refuge that spans 48 miles of the lower Detroit River and western Lake Erie.
The Refuge Gateway embodies the vision of the refuge. Co-managed by Wayne County and the U.S. Fish and Wildlife Service, it includes restored native habitat on the site of a former factory, a 700-foot fishing pier into the Detroit River, and a state-of-the-art LEED-certified visitor center and offices. The Refuge Gateway will provide public access to the river in Trenton, Michigan, and is the gateway into the hiking trails of the refuge’s Humbug Marsh, the last undeveloped mile along the U.S. side of the river. In 2017, the visitor center was named after John Dingell as a tribute to his decades of service in establishing and expanding the refuge.
More details about the May 9, 2020 [To be announced] Grand Opening will be released as they become available.
Back to content